Moustafa, the pharmacy manager, recently spoke to an elderly woman seeking ways to treat dark blue patches on her arms. Instead of suggesting any remedies, he asked the woman what medicines she was taking and discovered that she was dangerously mixing over-the-counter anti-inflammatory drugs with aspirin and the prescription blood thinner, Plavix. He sent the woman to the hospital, fearing that she was suffering from internal bleeding.

“People have the impression that if a drug is approved for over-the-counter use, then it must be much safer than prescription medicine,” Moustafa says. “That’s when trouble happens.”

Many consumers mistakenly assume that over-the-counter drugs can do no harm. But when improperly used, these medicines are lethal, killing hundreds of Americans and causing tens of thousands of hospitalizations every year, federal data show. Possible risks can easily be overlooked, given aggressive drug marketing and limited patient safeguards. With over-the-counter treatments proliferating and multiple products containing the same potentially dangerous ingredients, searching drug store aisles for appropriate medical remedies can be a prescription for confusion.

Problems with over-the-counter drugs could get worse, as the population ages – especially in places like Connecticut which has the 7th oldest population in the nation.  While people of all ages have been harmed by these medications, the elderly are at greater risk, since they take more medicine, experience more adverse reactions, and have more difficulty understanding health information.

Last year, the Gerontological Society of America and Consumer Healthcare Products Association convened a national summit, calling for research into ways to improve these drugs’ labels and how to better educate patients about these medicines’ potential risks.   And the federal government is considering lowering the maximum dose of one potentially dangerous ingredient found in hundreds of over-the-counter drugs: acetaminophen. Just last month, the government mandated that pharmaceutical companies drop the maximum dose of acetaminophen in prescription drugs to 325 milligrams per tablet.

There’s also growing interest in figuring out how to track what over the-counter-medicines people actually use.

It’s hard to monitor what non-prescription drugs patients buy – let alone take, given that these medications can be purchased in so many places, like drug stores, grocery stores, and on-line pharmacies. Many consumers don’t seem to consider these drugs as medicine, pharmacists say. More than half of patients, meanwhile, don’t even tell their doctors what over-the-counter drugs they take, surveys show.

“It’s under everybody’s radar,” says Beverly Schaefer, a pharmacist in Seattle, Washington and leader in the National Community Pharmacists Association.

Acetaminophen Poisoning, One Death In CT 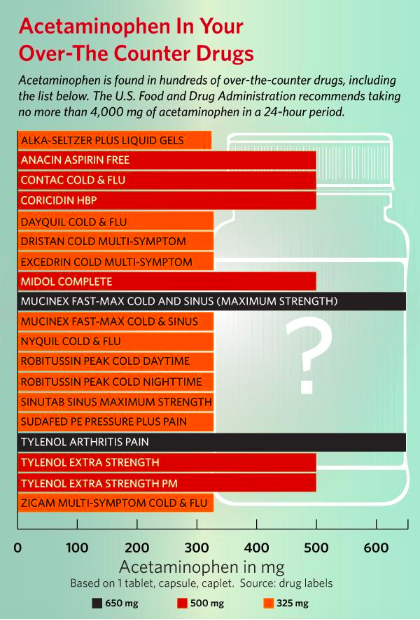 But problems with one widely-used painkiller have started attracting a lot of attention. Acetaminophen, the active ingredient in Tylenol, can be safe and effective when used as directed. When people take just one or two extra tablets a day, though, they can severely damage their livers.

“An elderly person taking large doses of Tylenol for a week can be at risk,” says Dr. Rockman Ferrigno, chairman of Bridgeport Hospital’s emergency medicine department.

Acetaminophen poisoning is the leading cause of acute liver failure in the United States and about half of these liver failures are due to accidental overdoses, medical experts say.

About 150 Americans die from accidental acetaminophen poisoning every year, according to the U.S. Centers for Disease Control and Prevention. Last year, one Connecticut resident died: a 51-year-old Niantic woman who suffered from chronic alcohol abuse and had cirrhosis of the liver, according to state medical examiner’s office records.

More than 23,500 people, meanwhile, get sent to emergencies rooms annually for accidental overdoses, according to the American Journal of Preventive Medicine.

For acetaminophen, part of the hazard is that it is in so many medications. The most commonly-used drug in America, it is contained in more than 600 over-the-counter and prescription products, including various formulations of Robitussin, Midol, Percocet, Vicodin, Excedrin, and Alka-Seltzer Plus. With the maximum recommended acetaminophen dose set at 4,000 grams a day, the equivalent of eight extra-strength Tylenols, patients could put their health in jeopardy by simply combining the daily allotment of an over-the-counter painkiller with just one prescription medicine.

“If you’re not sitting there with a calculator, adding this up, you can take too much,” says Joan Baird, the American Society of Consultant Pharmacist’s director of clinical affairs. “It’s really easy to do.”

Even some doctors get confused about how much acetaminophen is contained in various prescription drugs, she says.

For the general public, there’s surprisingly little awareness of potential danger. Only 31 percent of adults surveyed knew that Tylenol contained acetaminophen, according to a Northwestern University medical school study. Almost everyone was surprised that acetaminophen could cause liver damage, it discovered.

The confusion arises, in part, because consumers recognize drugs by brands rather than generic names, and focus more on ads for symptom relief than on drug label ingredients. Shopping for medicine can become all the more bewildering, as pharmaceutical companies extend their most popular brands, that is, using a variation of an original brand name when creating drugs to treat different health problems. For instance, Alka-Seltzer, best known for treating indigestion, does not contain any acetaminophen. Alka-Seltzer Plus, however, marketed to relieve cold and allergy symptoms, does contain the ingredient.

Even consumers who diligently read labels can be misled. Acetaminophen is sometimes abbreviated as “apap” on prescription drug labels, yet many people have no idea what these letters stand for.  Efforts to stop using the abbreviation are currently underway.

The federal government has begun implementing additional safety measures for acetaminophen, too. Besides lowering the maximum prescription dose last month, it has mandated stronger liver damage warnings on all medicines containing acetaminophen and required that the ingredient be more prominently identified on over-the-counter labels.

McNeil Consumer Healthcare, the unit of Johnson & Johnson that produces Tylenol, has made a series of safety changes. It has reduced the recommended maximum dose of 500-milligram Extra Strength Tylenol from eight to six pills a day and launched an interactive website, getreliefresponsibly.com, which allows consumers to type in a drug’s name to see if it contains acetaminophen. Last fall, it began putting warnings on Extra Strength Tylenol bottle caps in red capital letters that said: “CONTAINS ACETAMINOPHEN. ALWAYS READ THE LABEL.”

The changes come against the backdrop more than 125 lawsuits against the company, with many plaintiffs claiming they suffered liver failure from taking Tylenol.

Despite the focus on acetaminophen, public health experts see safety problems with other over-the-counter medicines as well.  Sleep aids are a big concern, especially among the elderly. Many of these drugs, like Nytol, Sominex, and Unisom SleepGels contain diphenhydramine, a sedating antihistamine that can cause confusion, dizziness, and increase the risk of falls. Diphenhydramine is on the so-called Beers list of 53 medications that medical experts contend the elderly should not use.

There’s little evidence showing these over-the-counter pills actually improve sleep, the Gerontological Society of America says.  At its National Summit on Sleep Aids and Sleep Health in Older Adults last year, experts pointed out that neither Diphenhydramine nor doxylamine, another key ingredient in these pills, has been put through the rigorous clinical trials that the government now requires. That’s because these drugs started being marketed before 1972, when the FDA launched its current regulations of over-the-counter medicines.

After examining all the research on the pills, the summit concluded: “These agents offer little benefit and carry substantial risks.”

Some people also believe that over-the-counter medications are safe simply because they don’t require a prescription.

The illusion of safety is hard to change, given the marketplace and government regulation. Advertising rules for prescription and over-the counter drugs, for instance, are completely different. Over-the-counter ads, which are regulated by the Federal Trade Commission, cannot include fraudulent or deceptive statements. That’s a far lower hurdle than the FDA’s rules for prescription drugs, which require company ads to have a fair balance of risks and benefits.

The growing number of over-the-counter products makes safety issues even more complex, says Philip Hritcko, president of the Connecticut Pharmacists Association. As household brands expand their product lines and prescription drugs get over-the-counter status, “there’s a greater burden on the consumer to make sure they’re educated,” he says.

There are about 300,000 over-the-counter drugs currently on the market, the Consumer Healthcare Products Association says, and more than 700 prescription drugs have become over-the-counter products since 1976, including Benadryl, Prilosec and Zantac.

There’s also a move underway to consider making some drugs available without a prescription. The FDA convened a meeting in 2012 to examine the possibility of selling prescription drugs over-the-counter under certain so-called “conditions of safe use.” The prospect of opening the floodgates to even more over-the-counter drugs makes some consumer advocates queasy.

Michael Carome, director of Public Citizen’s Health Research Group in Washington, D.C., worries that some patients are substituting over-the-counter pills for needed medical exams. His group, as well as an FDA medical advisory panel, opposed the FDA’s decision last year to let Oxytrol for Women be sold over-the-counter to treat overactive bladder. Overactive bladder can be a symptom of bladder cancer or diabetes, he says.

For now, pharmacists say they are trying to run interference, warning the public of potential dangers lurking in drug store aisles.

“You see a lot of strange things,” says Able Care’s Moustafa, who also visits senior centers, where residents bring all their drugs in a bag for him to examine. In one woman’s stash of medicine, he says, he found expired antibiotics from a drug company that had gone out of business ten years earlier.

He says he’s also found people who incorrectly assume it is okay to take prescription Nexium along with over-the-counter omeprazole – both designed to treat acid reflux, and many consumers mistakenly taking too many blood thinners simultaneously.

Over and over, consumer advocates offer the same advice to keep patients safe: More is not better, always read drug labels, and don’t self-medicate for too long.

“If you’re taking an over-the-counter medication and things are not improving after a few days, you should have a discussion with your doctor,” Ferrigno says.

This article was supported by the MetLife Foundation Journalists in Aging Fellowships, a program of New America Media and the Gerontological Society of America.